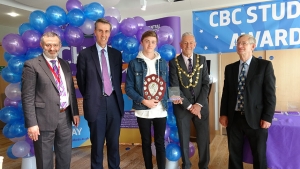 Mayor of Leighton Buzzard, Councillor Clive Palmer, generously sponsored a special Engineering Excellence Award to acknowledge the hard work of engineering students in Leighton Buzzard and this was awarded to Level 3 student Jack Quilter. Jack has maintained a high standard in his work through the two year engineering course at the College’s new campus at Leighton Buzzard. He is expected to get exceptional final grades on a highly technical and mathematical based course. He is planning to further his engineering studies at Loughborough University with a course in Engineering Materials.

Councillor Gloria Martin very kindly sponsored two awards for Central Bedfordshire College students in gratitude for the help that she received from the College during her term as Mayor of Dunstable. These were awarded this year to Grace Walshe and Charlie Twiddy for outstanding achievement in Photography and Catering respectively.

In addition to the student awards for each subject area, Principal Ali Hadawi CBE presented the Student of the Year Award to Public Services Student Kieran Cove. Kieran has been a remarkable student and achieved distinction grades in every assignment set throughout his course. His attendance and punctuality are 100% and his tutor commented that he will be a great asset to any future employer.

Principal Ali Hadawi CBE, who opened the event with a keynote speech, praised the achievements of the students, and highlighted the College’s successes and developments over the past year. He acknowledged the dedication of Central Bedfordshire College staff to providing support for all students to achieve their goals, and affirmed the College’s commitment to supporting the needs of the local area.

The event was held in the College’s student-run restaurant where parents and dignitaries were treated to a full afternoon tea prepared and served by the College’s Hospitality & Catering students. 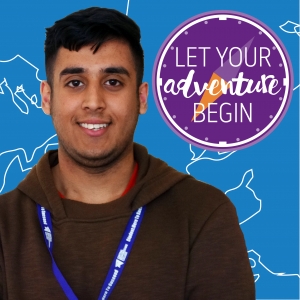 We are delighted to share that our Public Services student, Omar has been recognised in the Bedfordshire Police Force Focus Annual Awards.

Please see below for the scoop from Bedfordshire Police!

The force celebrated the hard work, achievements and acts of bravery from across our policing family at a special awards ceremony this week.

The efforts of officers, staff, Specials, cadets and volunteers from across Bedfordshire were recognised at the Force Annual Awards Ceremony, held at The Sharnbrook Hotel on Wednesday (5 June).

The winners of the 14 award categories were celebrated during the awards evening, which was hosted by our Assistant Chief Constable Jackie Sebire. Awards and certificates were handed to winners, with the support of a number of our key partners.

Among the awards was the PC Jon Henry Shield which is handed out every year to an officer who has carried out an exceptional act of bravery.  This year’s winner was PC Chris Willcox-Cassidy, a probationary officer, who was in the process of taking a statement from a vulnerable woman when she picked up a kitchen knife and threatened to harm herself.

Chris immediately recognised the seriousness of the situation and tackled the woman, grabbing hold of her arm to prevent the knife being wielded around. All his strength was needed to help diffuse the very volatile situation and ensure the woman was safe, all the while remaining caring and compassionate.

The award is named after PC Jon Henry, who was killed while protecting the public during an incident in Luton almost 12 years ago.

Inspector David Minney was awarded for his outstanding contribution with over 23 years’ service as a trained ‘Oscar 1’ managing our force contact centre, and a total of 36 years in the force altogether. He is considered by the force as an expert in Counter Terrorism-related issues and has spent numerous hours of his own time ensuring all Public Contact Staff are trained in these types of incidents.

The night was an opportunity to highlight the amazing work carried out by all in the force, including Investigation Officer Gary Hales who received an award for ‘thinking outside the box’ with his investigative skills when he jailed a man who fled the scene after leaving a victim paralysed during a car accident.

Cadet Omar Rafiq received the Cadet of the Year award for going above and beyond in what is his dream opportunity. Omar, who is battling illness, is an inspiration to all cadets and members of the force alike. He has completed 63 duties and 240 hours as a cadet and supports those around him assisting them in attaining achievements and embracing the experiences that being a cadet can bring.

We also celebrated our Chief Constable Jon Boutcher on what was his last annual awards evening with Bedfordshire Police.

A key theme of the evening was celebrating the family, friends and colleagues of our officers and staff. Many were present on the night to join in recognising those who have gone over and above what is expected of them, and gone the extra mile in our bid to protect the public and fight crime together.

Chief Constable Boutcher said: “These award ceremonies are the highlight of our year, they are an opportunity to recognise and reward our officers and staff for the outstanding work that they do day in day out. Everyone in Bedfordshire Police regularly goes above and beyond their daily duties to protect the public. Sadly we can’t recognise everyone at an event like this, but we never forget the amazing acts of courage and dedication they all carry out on a daily basis.

“I would like to give special thanks to our families, friends and partners for their support, and also our sponsors who funded this year’s event making it almost cost-neutral. The event also couldn’t take place without those who spent time nominating their colleagues, and all those who helped to organise this fantastic event.”

Are you interested in entering a career in the Public Services like Omar? Check out our course page here for Omar's video interview! 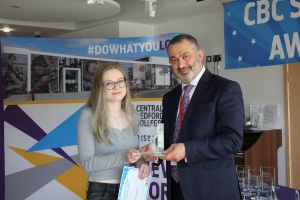 We are delighted to share that Tia Campbell, HNC Photography student at CBC has been shortlisted for the nation’s most prestigious student photography award.

The awards organised by leading manufacturer of monitor solutions, EIZO, are designed to celebrate young photography and creative talent across the UK and provide a vital career kick-start to students with the right flair and imagination.

Tia Campbell is in with a chance of winning an EIZO ColorEdge computer monitor and an exclusive, once in a lifetime placement with a world-renowned photographer.

Central Bedfordshire College students across a range of photography courses were asked to enter the awards, which are now in their 3rd year and continue to go from strength to strength. This year, EIZO was looking for submissions of daring, original and innovative images where colour plays a significant role in the creation and idea within the image.

The shortlisted entries are now presented to the judges for this year’s awards, who are all professional photographers and experts in the field. The judges are Nick Ballón, a London-based documentary and portrait photographer; esteemed landscape photographer Catherine Hyland and Benedict Redgrove, an innovation specialist whose most recent work includes shooting an ambitious project with NASA.

There will be a total of three national winners announced on June 14th, with the photography placements set to take place this summer.

Hayley Osborne, marketing manager for EIZO commented: “We are excited to announce the shortlist this year as the standard of entries has been incredible. Students across Bedfordshire have really got stuck into the brief and we’ve seen a wealth of innovative and inspiring submissions. We can’t wait to see who the judges pick as winners in June!”

Click here to see Tia's entry and all of the shortlisted entries: https://eizocolour.com/awards/gallery/

We wish Tia the best of luck and can't wait to see where her adventure takes her!